I just finished watching Claire Denis’ 35 Shots of Rum, her 2008 family drama about a widowed father and his college-going daughter who live in an apartment in Paris. It’s a wonderful film, built on snapshots of their life together and showcases the strong bond that exists between the two.

The film is thematically based on Yasujiro Ozu’s Late Spring, which also tells the story of a widower and his devoted 27-year-old daughter, who ultimately gets married and moves out. Late Spring was my first ever Ozu film and I was deeply affected by the famous final scene in which the father (played by Ozu regular Chishu Ryu), comes back from his daughter’s wedding celebrations to a now-empty house, sits down and slowly peels an apple as the realization sinks in that he will now live alone for the rest of his days. For me, this scene is on par with the final scene in Forrest Gump in which Tom Hanks sits at the school bus stop having sent his little boy off to school.

Likewise, in 35 Shots of Rum, the film ends with the father (played by Alex Descas) coming home to an empty house after a round of drinks (he drinks 35 shots of rum) at his daughter’s wedding celebrations.

Although one is based on the other, the two films are naturally different in terms of tone and scenes. After all, they are separated by time and space, one taking place in the reserved and polite world of 1940’s Kyoto while the other is set in a multi-cultural suburb of 21st century Paris:

Late Spring was filled with scenes of temples, tatami mats and Noh theatre, which gave international viewers an insight into Japanese culture. In 35 Shots of Rum, viewers across the world will instantly recognize the ubiquitous home equipment (radio set, washing machine, stove, rice cookers) and modes of transport (trains, car, scooter) which are so much a part of our lives.

In Late Spring, the daughter is overtly devoted to her father’s well being, stating early on in the film that she will not marry so that she can continue to look after him; it is the father who has to push the daughter out of the nest for her own future well-being. In 35 Shots of Rum, the daughter of course cares deeply for her father but there is no question that she will eventually move out and live her own life. In fact, it is the father who wistfully hopes that they can continue living the way they are, although he can see that she is starting to respond to the overtures from the young man living upstairs.

There is one point of singularity between the two films and this is food. A number of scenes take place at home and while the homes themselves are vastly different, the father and daughter eating their dinner together showcases the degree of intimacy and easy comfort that exists in their little world. I think there is something universal about how the preparing and sharing of food allows people to express their affection for each other in subtle ways. 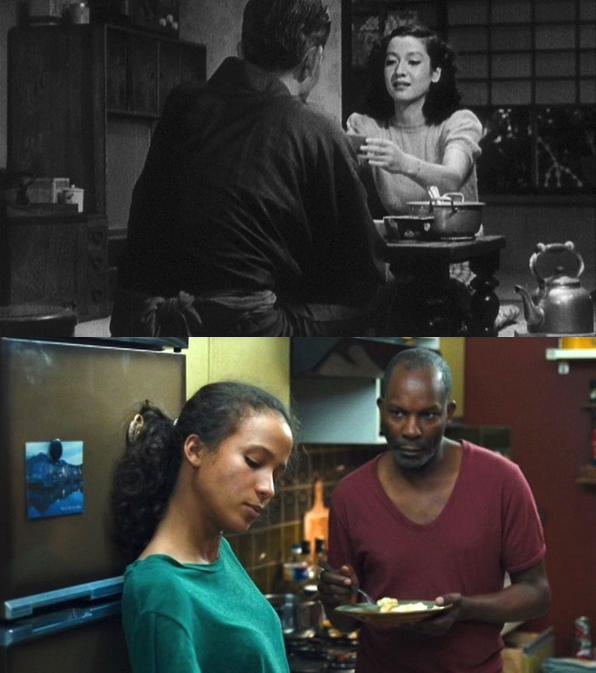 I can’t remember much of the music in Ozu’s Late Spring, but I did like the music produced by English rock band Tindersticks for 35 Shots of Rum; they created a simple riff which repeats through the film and I found it both wistful and comforting.

Overall, 35 Shots of Rum showcased more subtle film-making than Late Spring (which itself is considered subtle given the time and culture it came from). Without being overtly manipulative, both films tug deeply at the heartstrings and lead the viewer to think about family bonds, parent-child relationships and the aching inevitability of growing old.